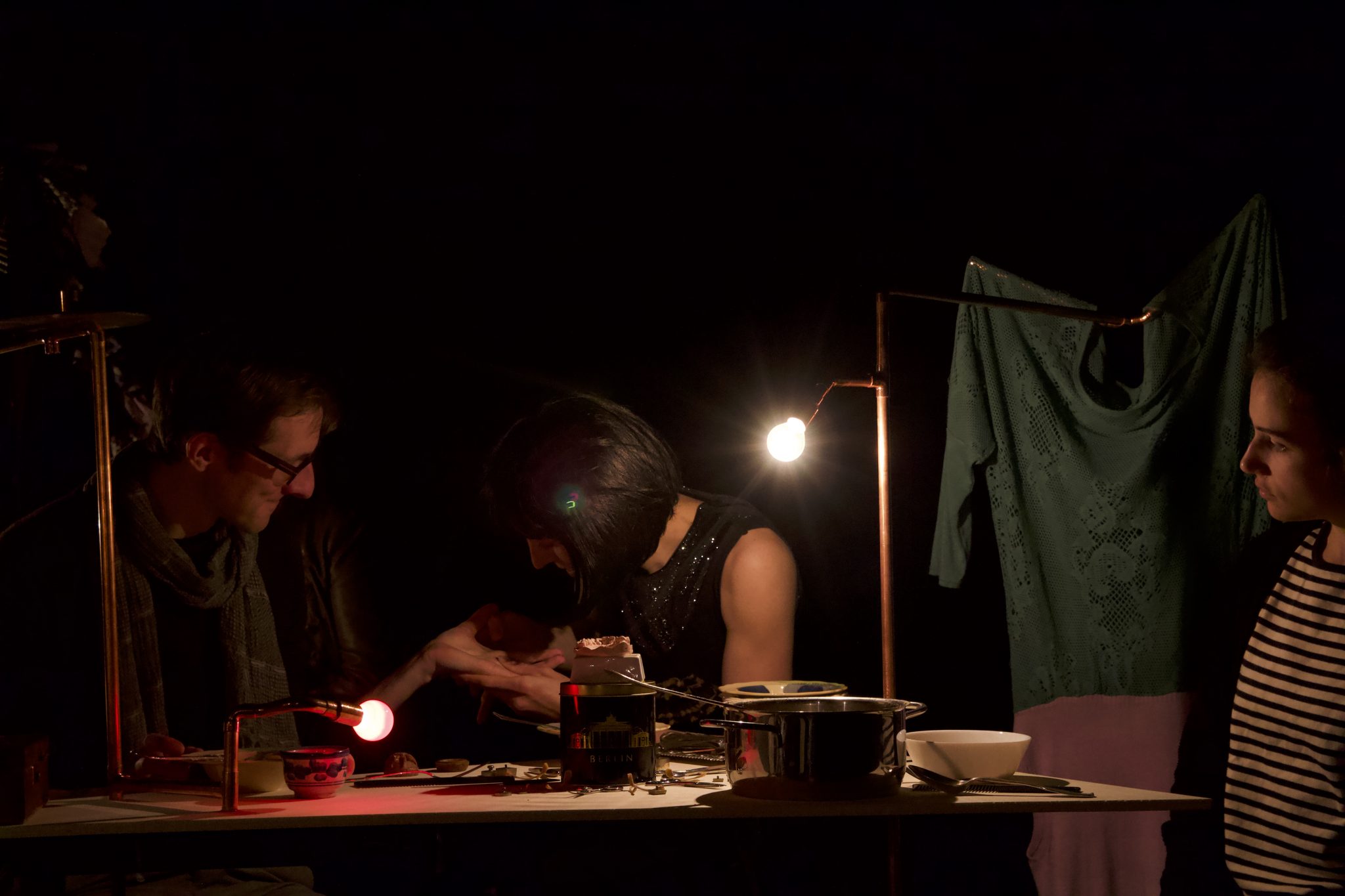 Adela Bravo Sauras is an architect and theatre director. She is currently doing her PhD between the two disciplines. This is also the research field for the group Nofourthwall which she founded together with Anja Stachelscheid in 2009.

The tradition of No Fourth Wall is beyond the usual forms of theatre – the range between architecture, performance and theatre. The previously staged works of NO FOURTH WALL were mostly „architectonic theatre“ in often atypical venues. Nofourthwall experiments with leaving out the ‚fourth wall‘, which is similar to walking through an exhibition. Nofourthwall is a diverse, internationally connected collective with its base in Berlin. A former work is for example Ipsagon – a transdisciplinary labyrinth around Ibsen and neurobiology. MY HANDS. MY MOTHER’s is their latest piece.
www.nofourthwall.com

N. – Your works are generally characterized by really interesting architectural installations – which tell a lot about your professional background – and by a strong influence of the dance theater.
Also in your last work My hands. My mother’s, both things are pretty evident. Can you explain more about this?

A. – In Nofourthwall space has always been one of the fundamental elements. Our visitors do not usually sit down but decide their own point of view and position in the space. We build architectural elements that help us achieve that. In this project we are sharing the same space with the visitors and it consists of several areas that they inhabit and move through. One of the main topics is the potential for violence that comes from belonging to a structure or family, represented in this performance by compelling our guests to be seated, serving a very traditional meaty meal, and then ushering them towards the next threshold. The project evolves from an non-fictional immersive theatre project towards a shared meal and ritual. It then transforms into an exhibition and finally ends with a film.

Usually at your exhibition we got used to see a very contemporary use of the body as way to express ideas, feelings and emotions, in my hands. my mother’s is not through the bodies‘ movements that you speak to the audience but through the objects which you move like in a choreography, giving them a soul.
Tell us about your project and tell us why this objects are the main theme of it? 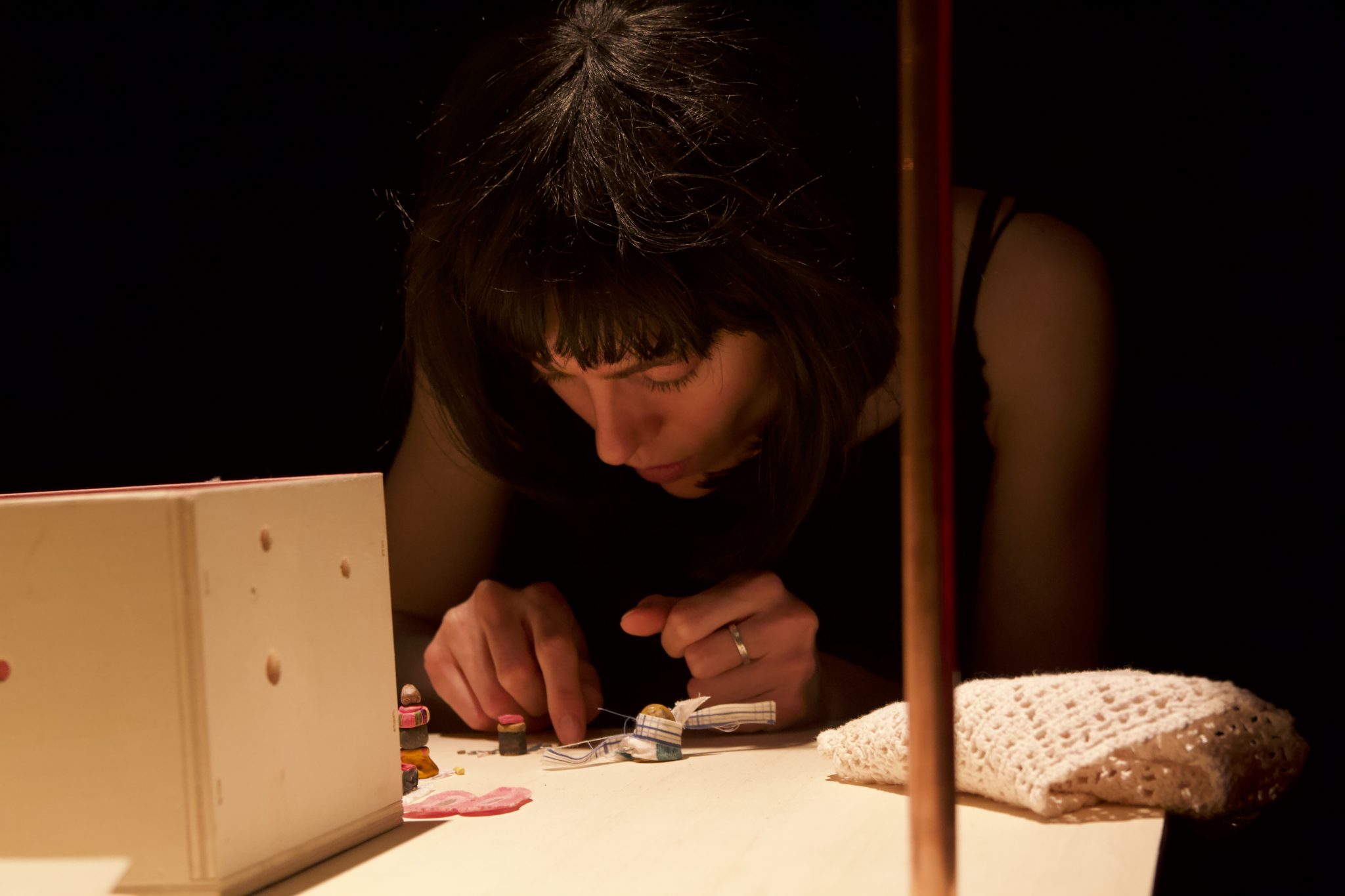 A. – When my mother died last year, I was left with many, many boxes and had to decide what to do with them. Together with my team, I chose original objects from her for this immersive performance. We explored the question: is it possible to transport memories to people who don’t share them? To me, the objects from my mother evoke many memories; but is it possible to sense something about a person, if you only see the objects which are left behind? Is it possible for other people to have their own memories evoked by doing it? I believe the objects one person decides to keep around tell you a lot about their personality and we wanted to give space to that thought. We searched for strategies how to evoke memories and create situations together with a new community of dinner guests. The objects are one central part, but not the only important element. I worked on the play for more than a year and had many collaborators – each with a different quality – I would like to mention some to illustrate the process for you. The conceptual work I did with Pietro Righi Riva, Anja Stachelscheid, Alfonso Ruano Canales and the preview rehearsals and first showings I developed with Dorothee Krueger and Frida Laux. For the final show I worked closely together with Liliane Koch, Bruno Tambascio and Frank Salewski. Liliane was with me rehearsing the piece in the last phase. I told her a lot about my connection to the objects, my vision of the play and we worked on the theatrical form I had already invented with Dorothee and Frida. She was mainly responsible for deciding which texts are spoken on stage. We are on stage together, she has more speaking parts than me and makes abstract sculptures out of my mother’s objects. I have a more sensual connection to the spectators by bringing them smells, touches and tastes. Bruno composed the music for the piece. I talked to him a lot about the songs I listened to with my mother and about the atmosphere I imagined. Out of this information, he made a wonderful music which transports also a lot of memories. Frank designed the costumes by using original clothes from my mother.

N. – What inspired you and why this title?

A. – The death of my mother made me think a lot about life choices and about conversations that you are not able to finish because your dialogue partner is no longer present. Also, my mother was not religious and in Spain, that means you don’t get a proper funeral – no ceremony whatsoever. That inspired me to imagine a mourning ritual and what form that could have.
The title is very personal. When I put on a ring from my mother, I was shocked by the similarity of our hands. I looked at them and thought for a second they belonged to my mother, but they were mine.

N. – Is there anything you would let the people know about my hands. my mother’s?
Why they should come to join the exhibition?

A. – MY HANDS. MY MOTHER’s is a very personal play, but at the same time the topic is universal and many people can relate. We deal with the topic of loss in a very subtle and immersive way so it is possible for our audiences to have a wide variety of other associations. It is an experience for the whole body, not only for the brain. I think each audience member will have a very special and individual response.