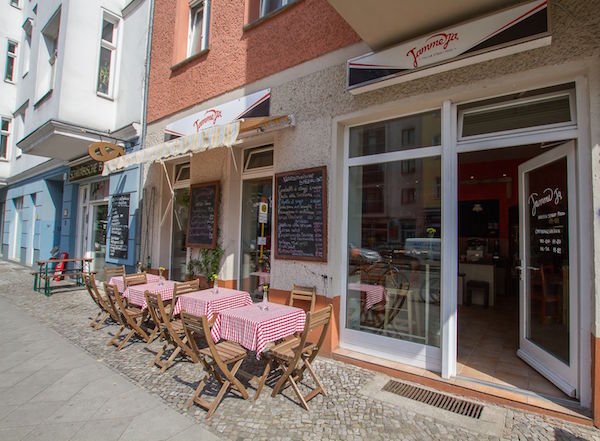 Sometimes people in Berlin don’t believe how difficult it is for me to find an Italian restaurant I really can enjoy.
Even if there are many possibilities, the most of them offer kind of an international Italian cuisine, not the original one. I’m from Napels the place where the pizza was born, the place where you can eat the best spaghetti and pummarola, mozzarella, babà and sfogliatelle, so it is not easy to adapt my taste to some fake italian food. It is hard to understand it without knowing the long tradition of neapolitan kitchen.
During the Bourbon domination (1734-1861) Naples – capital of the Kingdom of the Two Sicilies – experienced a period of great economic and cultural development, becoming one of the most important cities in Europe.
All spheres were touched: from industry to social policies, from the development of infrastructure to culture, the Bourbons were enlightened and advanced.
Thanks to the steel industry in Mongiana, the Ferdinandea foundry in the Serre area in Calabria and the rail industry in Pietrarsa, between all of the States pre-unification, the Kingdom of the Two Sicilies was the richest one and the most industrialized.
In addition to having the first railway that linked Naples to Portici, the first locomotive factory in Italy (1839/1840) and the first to produce the rails, the largest naval industry was located in Naples, along with the first merchant fleet and the most important Italian military fleet, third in Europe, with only the British and French fleets ahead (it is no coincidence that the first Italian Maritime Code was the De Jorio Code, drawn up in 1781 by a lawyer from Procida).

To name but a few of the public schemes; the first bridge in Italy was constructed, the Real Ferdinand bridge over the Garigliano, built by Francesco I of Bourbon and completed in 1828; the gas street lighting (in 1837 Naples was the first Italian city to be equipped), and the first telegraph line, which in 1852 established communication between Naples and Gaeta.
Also, with regard to social policy, the Kingdom of the Bourbons was distinguished for its innovation and progress.
In 1751 by the will of Carlo of Bourbon, the first Hospice for the Poor – a monumental building – was built by Ferdinando Fuga. Then in 1819 health care for the elderly and disabled was institutionalised through the Code for the Kingdom of Two Sicilies.
Under the Bourbons, the first secular university in Italy was founded (the Kingdom boasted four universities, the largest number of university students, and more than 50% of all books published in Italy), the Seismological Observatory of Vesuvio (the first in the world), the Academy of Arts, the famous Conservatory of Music of San Pietro a Maiella, the oldest theater in Europe, 1737, the San Carlo in Naples (in 1860 the capital of the Kingdom was the city with the highest number of theatres).
In 1833 Ferdinando II inaugurated the first industrial pasta factory. Pasta production became a prerogative for some Vesuvian countries where the climate favors the natural drying of pasta. 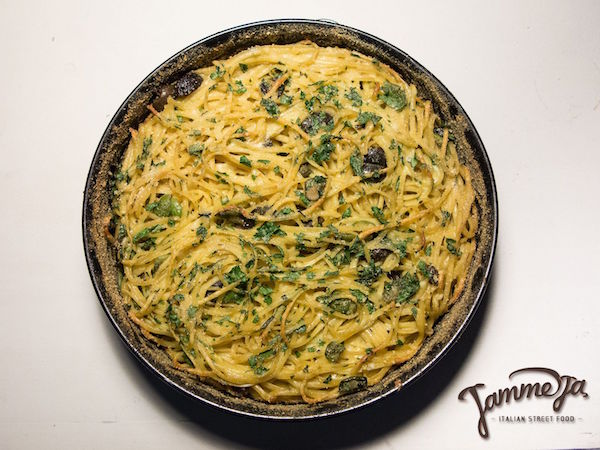 The birth to a new cuisine – the Monzù dynasty

In this climate of excellence and supremacy in every field, even the kitchen underwent a development that made it famous across national borders.
The Neapolitan cuisine, which was already well-known at the beginning of the fourteenth century (illustrated by Il Liber de coquina which was written one of King Carlo II d’Angiò’s courtiers in 1309) became recognised for its variety and richness during the French rule.
Its great success, especially during the nineteenth century onwards, is due precisely to the meeting between haute transalpine tastes and the local cuisine which already had Spanish and Arabic flavors.
Maria Carolina of Austria, wife of King Ferdinando IV of Naples, can take credit for this as she asked her sister Maria Antoinetta to send her the finest French chefs. And so the best chefs gave birth to the so-called Monzù dynasty (Monsieur in Neapolitan dialect).
The reciprocal gastronomical influences lead the way to a new cuisine, which managed to blend two traditions in the best way. The recipes were revised and transformed, lightening the French dishes from butter and sauces, and making the most common ones more elaborate and worthy of Royal tables all over Europe.
Although this culinary tradition was passed down primarily orally, there are important examples from the era of written recipes. Of particular historical value are La Cucina Napoletana by Vincenzo Corrado of 1832 and La Cucina teorico pratica (The theoretical and practical cousine) of 1837 by Ippolito Cavalcanti Duke of Buonvicino.
The Duke (descendant of the infamous Guido) subsequently added the Cusina casarinola in Neapolitan to The Essay of La Cucina teorico pratica.
In addition to the expert instructions on how to equip a kitchen and set the table, as well as the many tips on prepararing the different types of dough, some of the most famous Neapolitan recipes and dishes have been gathered and described in both essays, for example:
the zuppa maritata, soup made with different types of meats, sausages and vegetables from the fields around Vesuvius; the tympanum of macaroni (better known today as a timbale of macaroni), composed of several layers of pasta with sauce, cheese and meat, contained in the fragrant crust of the dough; parmigiana di melanzane, made of layers of fried aubergines, fresh tomato sauce and mozzarella; genovese sauce made of onions and meat; fried pizza, stuffed with ricotta cheese and cold cuts and many other culinary creations whose names derive directly from French, such as the sartù di riso, from sur-tout, because the rice is literally covered with meat sauce, peas, mushrooms, mozzarella , meatballs and sausages; the crocché, from French croquettes, panzarotti made of potatoes, eggs and cheese, wet with egg white, then covered in bread crumbs and fried, which today are still served in cuoppi (special sheets of paper rolled up) together with pastacresciute, fiorilli, scagliozzi, rice balls and eggplant which is gilded in flour and fried; ragù, from French ragout, which is a type of meat and vegetables cooked on a very low heat (in the Neapolitan recipe beef and pork stew are cooked in tomato sauce); the potato gâteau, more commonly called gattò, which consists of a sort of stuffed potato cake with meat and cheese, and many others things. 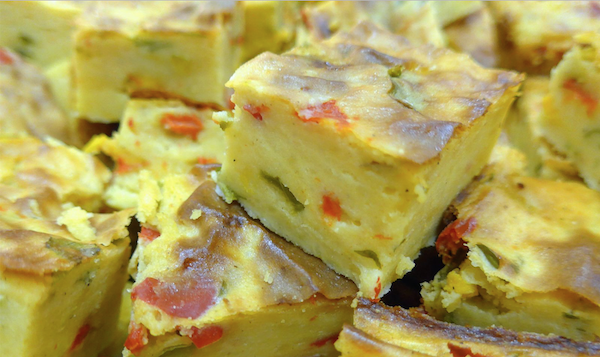 Even Goethe was in love with the neapolitan Cuisine

The richness and variety of this cuisine are recounted through literature of the same era.
In his Italian Journey J. W. Goethe, during one of his stays in Naples, was struck by the abundance and variety of every edible kind: 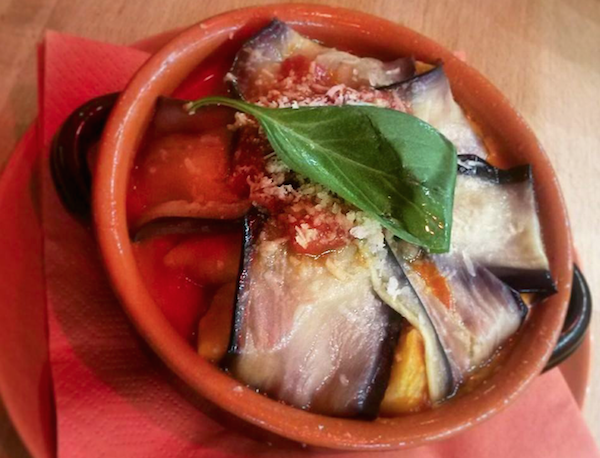 It’s incredible how through food you can narrate a part of history and rebuild the geography of a place. The use of the vegetables in the kitchen tells us about the climate and fertility of the land, eating fish signifies being close to the sea, meat during certain eras was comparable to using gold or painting with blue pigment blue; it expresses the richness of a country.

And that is precisely what Stefania is trying to do in Berlin. She is one of the owners of the trattorie Jamme Ja, which, through its dishes, inspired by the Neapolitan culinary tradition of the 1800s, attempts to tell the history of a place by enhancing familiarity with the products and recounting the recipes’ origins.
Despite some difficulties in obtaining raw materials, Stefania (who was a pupil of chef Antonio Tubelli, undisputed master of fried food and owner of the famous Timpani and Tempura restaurant in the historic centre in Naples) decided to revive some ancient dishes without changing their essence. Stefania has not succumbed to the temptation to alter the recipes to make them more accessible and international. On the contrary, her restaurant invites Berliners on a daily basis to try something new and she tries to educate their palates to different tastes. Jamme Ja, which in Neapolitan means ‚come on, let’s go‘, is simply an exhortation to experience the flavors of the Neapolitan tradition.
With great satisfaction and great success, this choice has been rewarded. After the initial reluctance towards dishes that are difficult to understand, now diners are discovering the goodness of frittata di maccheroni (macaroni omelette), of timballo or gattò.
Despite not being able to respect the philosophy of km 0 (according to which you should only cook with local and seasonal products) Stefania – who attended the Cucina Amica school of cooking in Naples – has, however, endeavoured to honour the authenticity of flavors through sourcing the original products.
Finding the Vesuvius tomato ‚o piennolo, that in Naples can be seen hanging out balconies, or fresh Sanmarzano (considering that the canning of food was born in Naples, that now brings tomatoes and tomato paste to the rest of the world…), finding friarielli to accompany the sausages, the scarola for soups, pizzas and salads, or the zucchini flowers to be fried and stuffed with ricotta cheese, being able to buy a good buffalo mozzarella, fior di latte, a fresh provola cheese, a scamorza, the typical Sorrentino delicacy provolone or the Agerola ricotta, tracking down some cicinielli at the fish counter, or alici (fresh anchovies) and fragagli for the Sunday frittura or fresh and aromatic blue fish; here in Berlin it’s an impossible task!
But this does not seem to limit Stefania, who has come to know and to use the vegetables and local products in accordance with the weather and seasons. The rest she has sent over to her from all over Italy.
Her Friday aperitif is a new-found habit for all Italians in the city and one that even the Germans have begun to value.
Among the daily specials and a spritz, you can start the weekend in the tastiest way!
So jamme ja, do not hesitate. All should make a journey into history through the scents and flavors of tasty food!!! 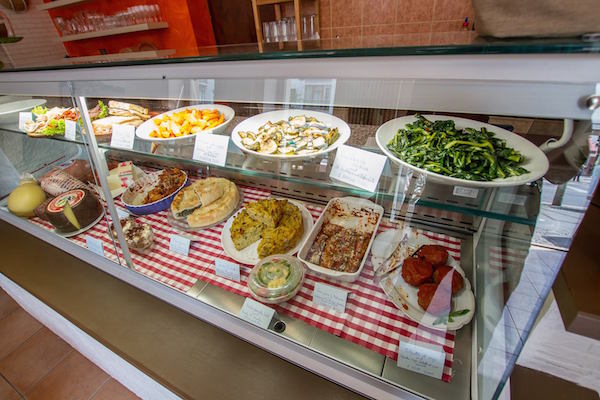 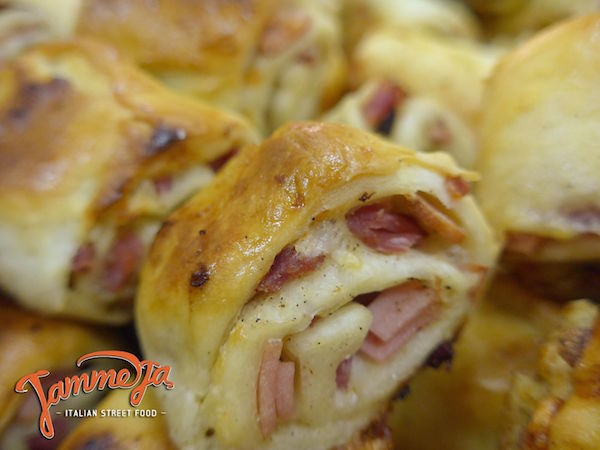 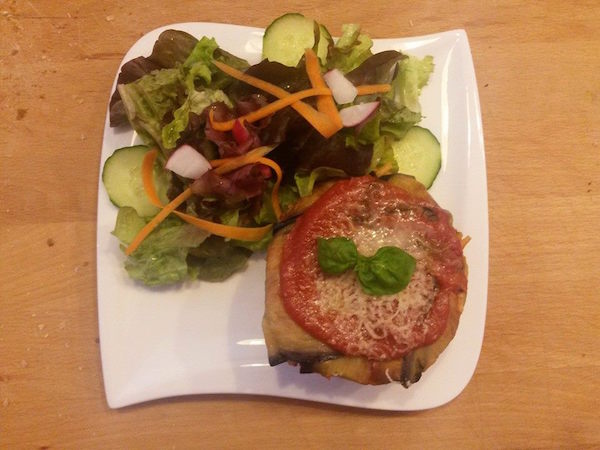 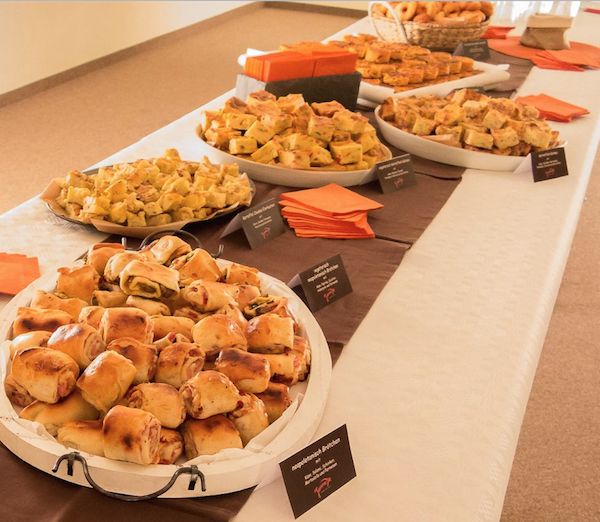