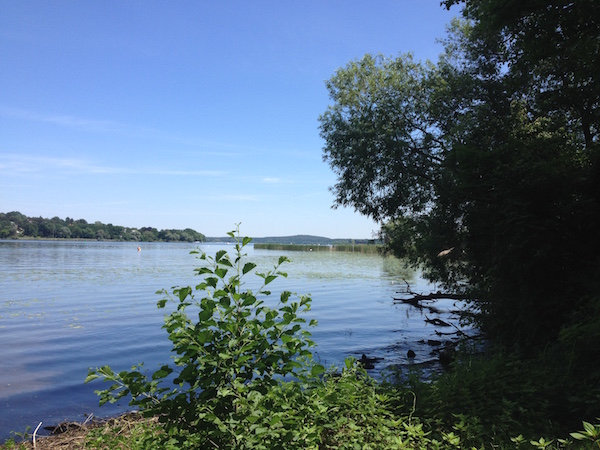 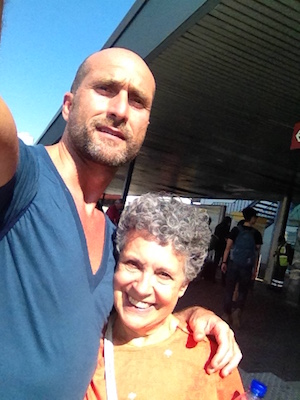 Anyone who has visited Berlin during the cold months, can not have a complete picture or a clear image of the city.
Although the dry leaves of autumn that litter the streets with a maroon and yellow cloak, or the meadows white with snow in winter can be suggestive, the metamorphosis that Berlin undergoes in the spring and then the summer is not just about the scenery, but regards the very air of the city.
The air becomes electric, contagious, detonating not only nature but also the enthusiasm of the people.
The dark and cold of the winter months is contrasted by the warm spring light, which rises in the early hours of the day and lingers until almost midnight before disappearing into the starry sky of June. Already in May the melancholy bare trees, reborn under the pressure of bursting nature, are filled with colours and lush fronds of fruit and foliage. In summer the lonely roads which in January are crossed by people holding their heads close between their shoulders to avoid losing heat, are crowded with people who rush to occupy every green space, to undress and enjoy every ray of sunshine. The need, both morning and evening, to be closed in bars or smoky rooms, is overcome by the possibility of being outdoors late into the night.
I mean, anyone who lives in Berlin knows what a joyful and positive effect the arrival of summer has on their mood and even on their body, and those who have not tried this difference, can not expect to really know the city.
It is for this reason that, after waiting a few years, I was very pleased to receive a visit from my mother precisely in this period of change. 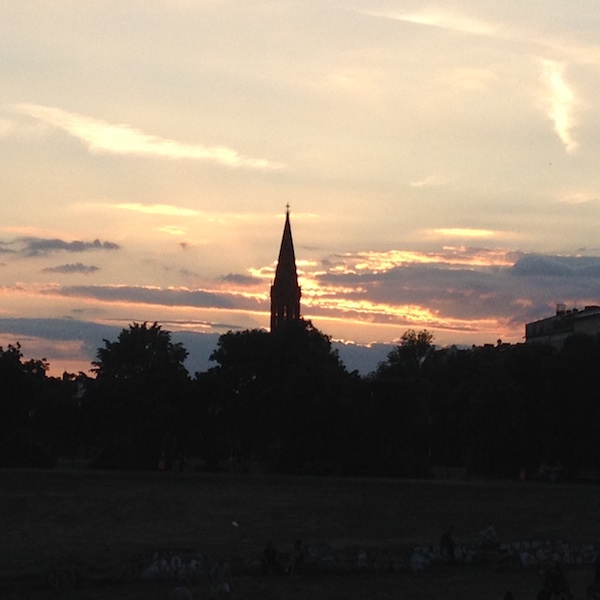 Another side of the city

For the first time since I live in Berlin, I was able to show another side of the city.
When she arrived, it was late afternoon, but thanks to light and mild climate, we took a short walk between Kreuzberg and Neukölln. We walked along the canal, I showed the Barettino, where sometimes I go for a hearty breakfast or during the evening for an Italian aperitif with some friends, I showed her the ballroom where I celebrated my last birthday, the public laundry where I used to take my laundry when I moved to Berlin, and other places from my daily life. Given the variety of restaurants and cuisines from everywhere, after a long list of possibilities, I let my mother choose where to dine, with the understanding that we would try different things every day. The first night was Thai cuisine, in Weserstraße. At the outdoor tables we ate rice and duck while drinking a refreshing cocktail.
But the biggest news was the program for the following days.
Instead of going to museums, like we usually do in winter time, I chose as the destination of our tours the most beautiful parks in the surrounding area. 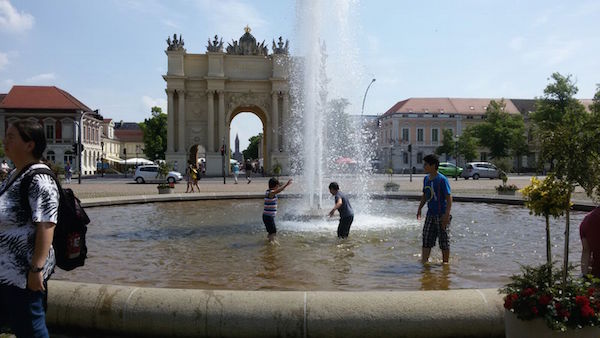 On the second day, in fact, we went to Potsdam and visited the Sanssouci gardens.
Potsdam, a city west of Berlin, is the capital of Brandenburg.
For centuries it was preferred by the Prussian kings, and not only them, to today’s Bundeshauptstadt, the federal capital.
If today Berlin is viewed with a mixture of distrust but also with envy by other German cities, more provincial and conservative but richer and cleaner than the capital, in the centuries before WWI it was not at all popular – too Protestant and too far to the East from the economic, technology and cultural centre of the country.
In 1946, when he was still mayor of Cologne, Adenauer was opposed to the idea of making Berlin the capital of Germany, and when he was elected head of government (1949), he carefully avoided travelling to the capital, except when it was strictly necessary.

In 1870, Guglielmo I would also have preferred that Potsdam be the capital of the new empire.
With its famous Stadtschloss (city castle), which the kings favored to that of Charlottenburg, Potsdam was particularly loved by Frederick the Great, who designed and built his summer residence – the Sanssouci palace – with terraced vineyards, and by Guglielmo I, who in 1833 built the Babelsberg Castle on a hill overlooking a bank of the Havel River.

And so, alternating walking on foot with comfortable tours of the city on board an open-air bus, we saw the typical low houses in the nineteenth century old town, the majestic Brandenburg Gate, built in 1770 to celebrate Prussia’s victory in the Seven Year War against Austria, the beautiful Nikolaikirche in Alter Markt square, built in 1830 in the neo-classical style, the Holländisches Viertel (Dutch quarter), the Alexandrowka (Russian district), the castle Sanssouci, the summer residence of Prussian King Friedrich II and its park.
On the way back, leaving the royal Potsdam behind us, we went to Alexanderplatz and due to  the unusual heat we saw children bathing in the fountain at the foot of the television tower – a really unusual sight for Berlin, but perfectly in tune with its unpredictable and eccentric spirit.
In the evening, for dinner, a giant Schnitzel in Richardplatz! 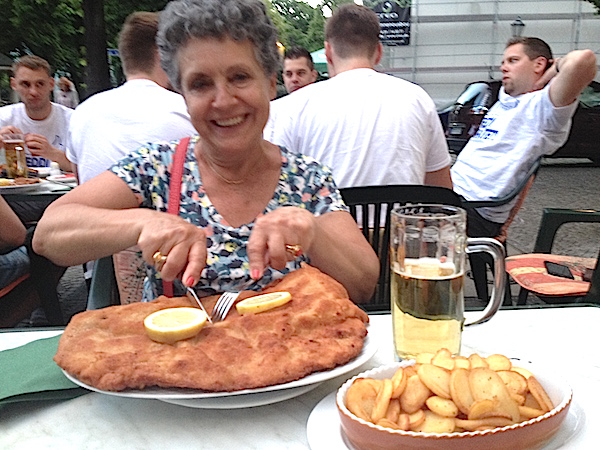 On the third day, in the company of some friends, we went to Treptower Park, a very large city park, which runs along the Spree river.
We found a lawn in the sun in front of a small lake beside the Sowjetisches Ehrenmal (Soviet Memorial) and, with our towels, we lay on the grass for our picnic.
It was nice to show to my mother the things that I always tell her. The people who flock to the parks at the first sun and who swim in frozen lakes, the large number of dogs that roam free, ready to respond to their master’s first command, the boys with music and beers that are camping in a circle laughing loudly, young families with blonde children running in the great outdoors or playing in the playgrounds, the men who collect bottles for the pfand (deposit), those who practice walking on wire strung from one tree to another, those who drank the day before who are sleeping in the shade, people of all ages reading and sunbathing naked.
While we were there, conversing and looking around, our day became unexpectedly lively. A black cloud dumped rain on our heads for about an hour. We therefore covered our things and sheltered under the trees, waiting for the sun to come back and everything to resume as if nothing had happened.
After a while, in fact, sitting on a wooden platform near the lake, we could enjoy our brunch with the typical scent of wet grass all around us.
Directly from there we went to the Sunday fleamarkt in Boxhagener Platz with a friend’s car.
In Berlin there are an incredible number of open air markets, and Boxhagener Platz, although not the most famous or the most typical, is one of the ones that I prefer. There are many bargains and each time I walk through the stalls I am seized by a desire to buy useless things that I would not know where to put.
After having looked around between the stalls and stopping for a beer in a bar we ended the evening eating sushi in Glogauer Str.

On Monday, because of my many business appointments, I could only dedicate a few hours in the morning to my mother. Nevertheless, even on the fourth day, we could not miss a long walk in a city park. This time it happened to be Hasenheide, which owes its name to the fact that since 1678 the park, which alternates meadows with woodland, was a place for hunting hares.
Hasenheide is the park I frequent the most because it is located just two minutes from where I live so it is the ideal place to get away as soon as there is the possibility of sunbathing.
The park is very large, there is an area where children can play and can get close to many animals (there are even camels!), there is a large fenced area where the dogs play, a valley where they often organize picnics, there is a nudist area, a large lawn where you often see people doing gymnastics, a beautiful garden with colourful flowers and benches all around, an area with an open-air cinema, one where there are sometimes fairground rides, several wooded areas with squirrels and foxes, a pond with geese, swans and ducks, and big green spaces to enjoy.
In the afternoon, as I held my pilates classes at my studio, my mother was at home preparing typical Neapolitan finger food for the dinner we had planned following pilates. It is impossible to describe the smells and flavours of stuffed fried pizza with ricotta cheese and ham, pizza with tomato sauce, croquet potatoes, battered eggplant, and rice balls.
Between music, stories and laughter the evening ended for everyone with a smile and a full stomach. 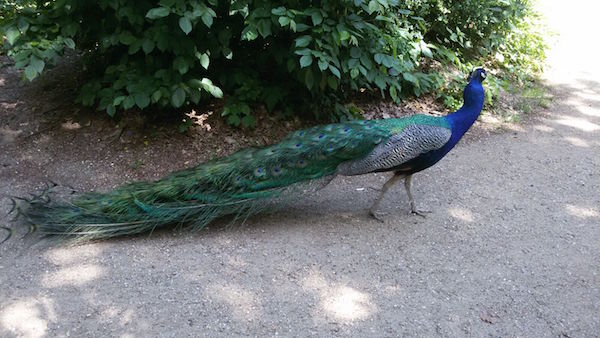 The next morning, at the dawn of the fifth day, we quickly prepared ourself to go to Wannsee. This time our destination was Pfaueninsel (Peacock Island).
In 1795 Frederick William II transplanted a colony of peacocks onto a small island in the Havel River, which is now a nature reserve.
Besides the Gothic castle there is the Luistempel (a small greek style temple), the Meierei (dairy), a rose garden and a fountain situated on a small hill, but the real attraction of the island are the peacocks walking freely along the paths and lawns of the park around the area where the aviaries are located.
Walking along the perimeter of the island is very fascinating. For a moment the sight of water can make you forget that it is a lake and give the impression of being on a small island in the Mediterranean.

We followed the entire outer path, enjoying the view, the sounds and the smells of the Pfaueninsel. Without maps or directions, we were guided by the shrill and sharp cries of the birds up to the aviaries and there we met peacocks with their long and regal tails, a flock of sheep grazing, pheasants and parrots.
Despite the hours spent walking, our day was not over with the excursion to Wannsee. With my tireless mother we went to dinner with friends in a residential area of the city that she did not yet know.

On the sixth day, perhaps in tune with the feelings of melancholy caused by the thought of my mother leaving the next day, the program included a tour of the Jewish quarter in Mitte, a stop at Der Berliner Mauer and, so as not to betray the spirit of the holiday, a visit to another park: Der Volkspark Humboldthain in Wedding.
With the guidance and pleasant company of my friend Lucio Campoli, a brilliant potter that I met in Berlin a few years ago, we went first to Mitte and then to Prenzlauer Berg to visit what remains of the wall. In short, the theme of separation was prevalent, but it did not stop us from enjoying our daily mission: yet another visit to a park.

The week flew by, but it was intense and full of wonderful experiences. Moreover, sharing is the most effective means of communication. I was able to show my mother a new side of my adopted city, again giving her one more reason to understand deeply the reasons for my choice and my love for Berlin.
On the day of departure and those subsequent it was raining in Berlin. 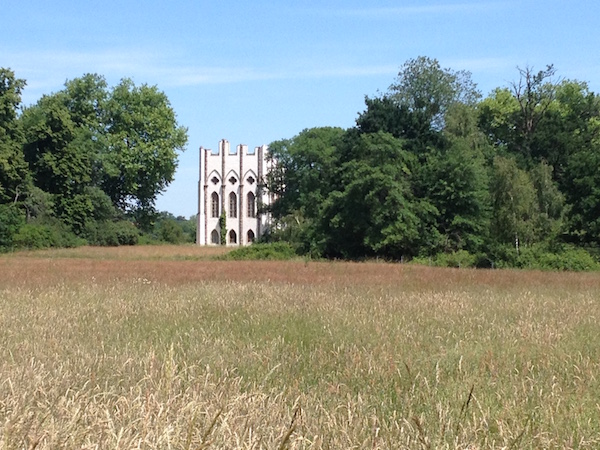 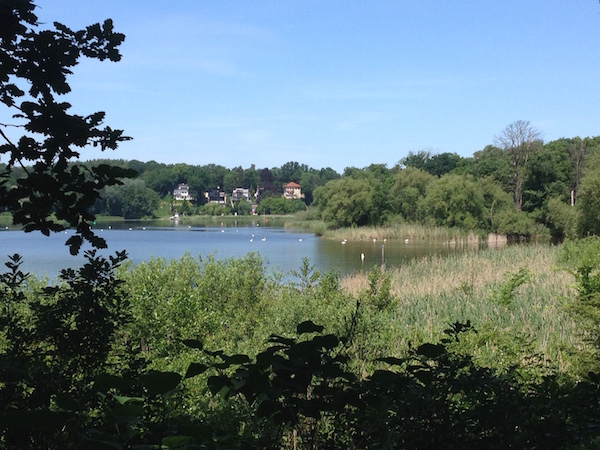 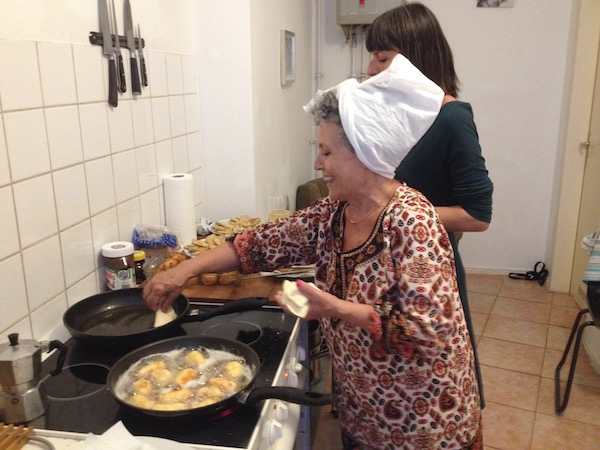 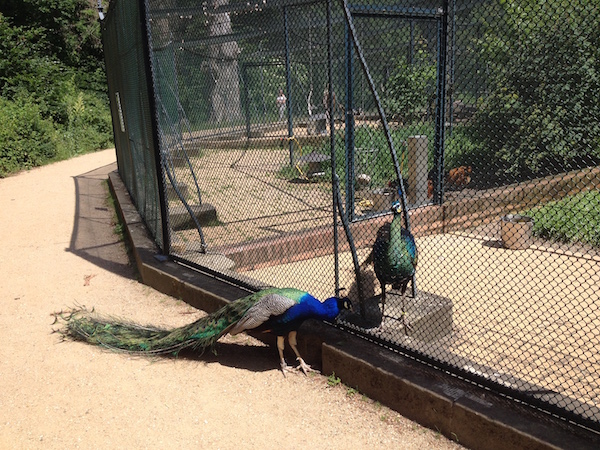