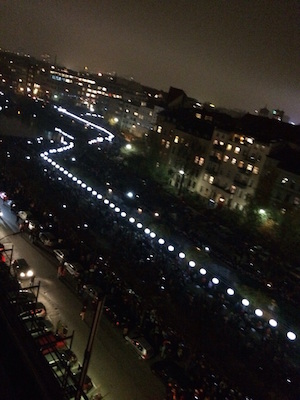 For some people, the night is like the Siren’s song for Ulysses. A call which is impossible to resist, a spell that is repeated every day, which bends one’s will and dulls reason, making it a distant and weak cry of our own consciousness, a voice which is destined to be ignored.
That’s how it’s been ever since we were little. There are children who, just after sunset, sleep contently. Then there are those who hear voices and noises, those who imagine shadows taking shape and that, from hearing a footstep in the distance, gasp with a mix of fear and excitement. Even as a grown up, there are those who fall asleep without any problem and those who, after turning off the bedside light, fantasize about their future or retrace things that have already been lived, imagining a different ending every time. There are those who twist and turn in their beds, struggling with thoughts and concerns and who find themselves face to face with their own ghosts that they insist in not facing. Everyone waits for the new day to bring an apparent calm to their heads, to their hearts, to their lives.

The night is mysterious; it is dark, unpredictable 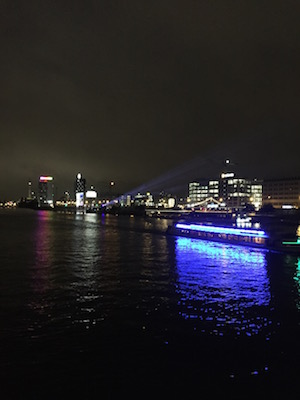 How many things are hidden in the shadow of the moon, and how many feelings are awakened during the hours before morning light? The night serves as an emotional amplifier. Everything becomes huge in our minds, taking on forms, which are deformed beyond belief. Our imagination makes things possible, which, at the first light of the Sun, dissolve into darkness. Many instincts take over, annihilating our will and clouding our judgment, which becomes less and less vigilant as the darkness advances. It is for this reason that at night you can do things that the next day you would like to forget. We come into contact with the dark and hidden part of ourselves, with unmentionable desires, with fears that we do not confront when lucid, with a loneliness, which is difficult to fill.
It is at night that you meet the unwanted, the lunatics, the vagrants and the drunks. But the night is also a time for lovers, poets and stars.

For those who are looking for a palliative or an escape from their illness or own thoughts, for those who cannot sleep, or for those who simply want to live and enjoy life after dusk, Berlin offers endless possibilities for entertainment that meet everyone’s needs. 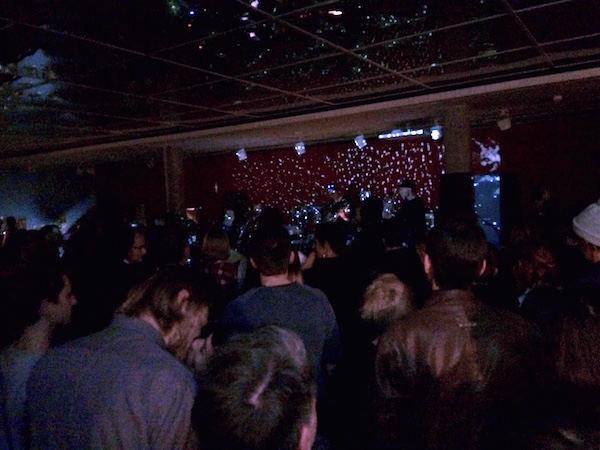 Here the night is always young. In addition to all the cultural events that often go on until very late, there are late-night bars, clubs and discos for people of every age and every taste. The greatest attraction is techno music, which attracts more tourists to the city than the museums. Those who love techno come to Berlin for Berghain, the temple of music known throughout the world, for Tresor, an institution of more than 25 years old, for About Blank with its outdoor garden, for Renate, located in an ancient building once occupied by squatters on Treptower Bridge, for the picturesque Watergate overlooking the Spree, for Weekend with its terrace in front of the TV tower, or for the festivals and parades that are organized every year. Drugs, sex, alcohol and loud music are the ingredients, which are common across all of the weekend festivities. But even though each of these clubs organizes sensational evenings, Berghain is something else – it’s been hailed as the best club in the world by the British DJ Magazine – it’s a mecca for electronic music fans. 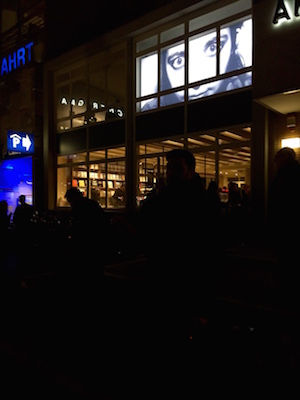 It’s not easy to enter

I remember in detail the first time I went there. It was the summer of 2010. I was with some German friends who I had only recently met. We arrived in front of the club. I stood with mouth wide open at all the people who were still queueing at 4 am. There were thousands of people between 20 and 50 years old who were trying to keep themselves warm, crossing thin arms, rubbing hands or hopping from one leg to another. I had never seen anything like it, not even at a stadium or at a concert.
After a quick greeting to the bouncer, we entered without paying and without even waiting for one minute. Being allowed to enter, as I later found out, is not easy, but for those who endure the mile-long queue and have the good fortune to cross the entrance, undergoing full body searches (they also cover the lenses on mobile phones to prevent photos from being taken inside the premises), the show which is on display is unique, impossible to describe. In addition to the impressive structure, a former power station on the border between Kreuzberg and Friedrichshain, where the club gets its name from (obtained from the portmanteau of Kreuz-berg and Friedrichs-hain), what is most striking is the range of experiences that you can try out, and the things you can participate in during an entire weekend of non-stop music. Fortunately I was with the right people. My friends knew the bouncers and all the staff who we later met inside, which is how I managed avoiding the risk of not being admitted into the club.Once I was inside the huge entrance hall, I saw people stretched out on concrete benches. Some of them were bent over themselves to recover from drugs, others were lying down to sleep for a couple of hours and to then go back and dance. I do not know whether on that first occasion (as I tried to get my bearings) I was more impressed by the naked people who walked casually into the dark room, or by the work of Piotr Nathan hanging on a 20 metre high wall in front of the cloakroom. Climbing the steel staircase, which leads to the dance floor – I still remember the effort to accustom my eyes to the pitch black darkness and smoke – there was a crowd of people in the center of the room moving in unison in front of the DJ booth, who was for sure some kind of celebrity in the techno music scene. As well as on the dance floor, there were people all over the place. A group of boys were dancing on the stairs at the sides of the dance floor, others were glued to the speakers (which were taller than them) some people were moving in an agile manner on a raised structure in the middle of the room. Two muscular guys were swinging clinging to the chains hanging from the ceiling whilst blue lights were tracing geometric lines on their backs and on their bare chests, shiny with sweat, while thousands of other boys, all around me, were moving their feet and arms in unison like an army of soldiers dancing. I felt a sense of alienation but also the impression of being a spectator to something that I would not forget. I was in a place that was totally different than any other club in London, Paris or Barcelona that I had ever been to. Berghain does not try be charming, it makes no effort to be a cool place. It seemed as though they had opened the doors of the old factory for the event and that people had started dancing regardless of anything else that was going on, unaware of one another. I was the only one who was dressed in a „cute“ way. If I had gone alone, I’m sure they would have not let me in. Despite having earplugs, kindly provided to me by the staff working in the cloakroom, the power of the music, with its vibrations, almost made me wince with every beat. That music managed to get inside of you and get you moving as though it were an absolute necessity. It took you into a state of unconsciousness vigilance. 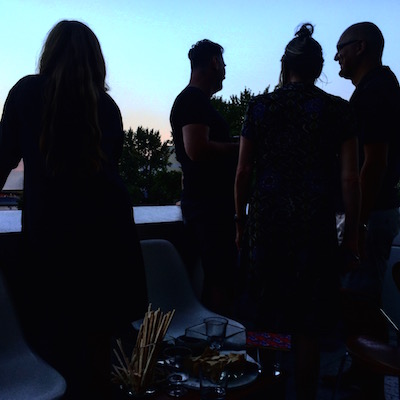 I was on the dance floor, but at the same time I was in a place inside and outside of myself, surrounded by thousands of other people, like in a collective ritual.
I danced for a long time and for sure lost track of time. I decided to look for my friends, whom I had lost – I have no idea how long for. On the right side, where one of the bars and chill out areas are, I found a couple of them sitting down smoking on a swinging platform. On the left side of the booth, past the bathrooms, where three or four people came out of the doors at a time, there was a great coming and going of people because of the dark room (dark corridors where occasional sexual encounters occur.) On the upper floor, where Panorama Bar is, the atmosphere was different, more relaxed somehow. The music was more house rather than techno. Behind the bar, in the middle of the room, other friends were chatting, or rather, attempting to speak, sat on the sofas. I saw works by Marc Brandenburg and Wolfgang Tillmans, and at the side of the room, there were steel booths open at the front, where people withdrew to to satisfy a variety of needs.
It was now seven o’clock, when for a moment, the shutters opened and they let in the morning light that briefly flooded the room. The effect was amazing.  Everyone started to scream with excitement, but after a few seconds, everything was dark and blurry like it had been a few moments before.  Everybody wound their heads down to the rhythm of techno in a dense cloud of smoke and sweat.
It was a very long night and even though the music was going on until Monday morning, I decided to leave. After that time, I went back again. I was either invited there by a DJ or by Lorenzo, a friend who works in the cloakroom.
Once I even saw a concert/performance by Carsten Nicolai, also known as Alva Noto, father of electronic music and founder of the record label Raster-Noton, but even so, I remember that first experience it better than any other time. 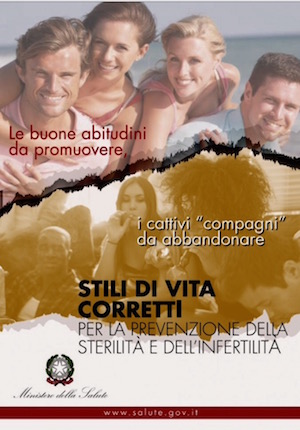 One of the great cultural differences that I often reflect upon between Protestant Berlin and Catholic Italy is that here, there isn’t a tendency to deny reality, to pretend that certain things do not exist. Why deny that there are people who like to swap partners, practise casual sex, or who get excited about peculiar things or situations? Quite simply, here in Berlin these things not only go uncondemned, but more strikingly people don’t deny the existence of certain instincts or sexual tastes that, on the contrary, are completely natural, even if they are less commonplace. In Italy we organize events such as Family Day, or worse still, Fertility Day. If you want to have children you are advised not to meet up with black guys, or men who smoke hashish. This is later on then denied and the person responsible for the communication is made into a scapegoat and becomes solely responsible for the xenophobic campaign. Meanwhile, here in Berlin whoever becomes a parent receives major financial support from the state, whilst in turn those who want to hang out in a club for three consecutive days, whether they are professional or a student, is free to do so without feeling guilty or paranoid.
I do not think that Berlin is a city without problems. I do not think that people here are better or worse than elsewhere. I am also convinced that some intolerant and racist sentiments are common to all men. However, people are definitely accustomed to respecting the freedom of others without making moral judgments. And even here, there are most likely self-righteous moralists and conservatives, but this does not prevent an absolute sexual freedom. This strikes me as a good thing. 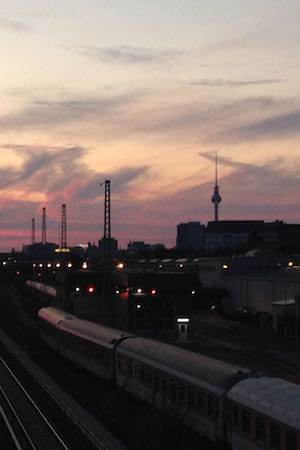